"Winning a tournament wherein you have to compete against the world's best players is a very big accomplishment, and I'm very happy for this win," said Orcollo, the top player of Perry Mariano's Bugsy International Promotions.

"I've hoped and prayed hard enough to win this crown for my countrymen as well as my boss Perry and Verna (Mariano) who has been helping me compete abroad," added the former fisherman from Bislig, Surigao del Sur Orcollo, who is celebrating his 35th birthday last January 28.

“Once again, congratulations Dennis (Orcollo). You have made every Filipino proud of your triumph,” said long-time benefactor sportsman/businessman Billiards Managers and Players Association of the Philippines (BMPAP) founding head Ceferino “Perry” Mariano, also the president of Bugsy International Promotions.

"This is the reason why we managers are still holding the dream that someday our lawmakers can help this sport. We will also work in making Quezon City the Wimbledon of billiards," added Mariano who is planning to put up an international tournament this year dubbed as World versus Philippines.

Last year, Orcollo who teaming up with Lee Vann Corteza to beat  Dutch tandem of Neils Feijen and Nick Van den Berg in the final, 10-8, to reclaim the crown last won by the country in 2009 behind legends Efren “Bata” Reyes and Francisco “Django” Bustamante, who were also the inaugural champions in 2006 World Cup of Pool.

Biado, on the other hand, subdued Riyan Setiawan of Indonesia, 9-5; Keng Kwang Chan of Singapore, 9-4; and Thanh Kien Dang of Vietnam, 9-3.Both players have been supported by Bugsy Promotions of Perry and Verna Mariano.

The gold was the first for the Philippine Billiards team after they stumbled in Mens and Women's 9 Ball and in One Cushion Billiards.

Meanwhile, Rubilen "Bingkay" Amit and Iris "Fighter" Ranola will attempt to go for gold again in the Women's 10 Ball competition on Thursday. Amit, the reigning world 10 Ball champ, won silver in 9 Ball while Ranola, who lost her father to cancer on the day she flew to Myanmar, is trying to put aside her personal grief in the hopes of bringing joy to the nation.
Posted by Jovie Sison at 12:36 AM No comments:

A wide open race looms when the much awaited first invitational of the Mayor Boyet Ynares 10-ball billiards championship on December 28, 2013 at the Binangonan Recreation and Conference Center in Binangonan, Rizal.

Filipino hall of famer and double world champion Efren "Bata" Reyes, top player of Puyat Sports will grace the simple opening ceremony prior to the start of the competition.

Reyes who bagged the World 9-ball tiara in 1999 in Cardiff, Wales and World 8-ball title in 2004 in Fujairah, UAE will also play former Southeast Asian Games gold medallist Victor Arpilleda in an exhibition match in one of the highlight of the said affair.

Ramon "Maestro Monching" Mistica, who beat another Filipino pool legend Jose "Amang" Parica in the mid 80's is the tournament director in the said billiardsfest, which aims to promote billiards in the grassroots-level and to discover future world champion. 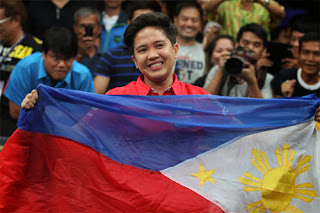 The game was tied 7-all when Amit took the last three racks to win the championship.

Amit‘s first-place finish was her second 10-ball title after winning in 2009.

Amit defeated Tsai Pei Chen of Taiwan, 9-7, in the semi-finals to advance, while Fisher dispatched China’s Han Yu, 9-2.
Posted by Jovie Sison at 3:33 PM No comments:

Returning to the finals of the prestigious World Cup of Pool, Filipino ace Dennis Orcollo made sure there was no heartbreak for him and compatriot Lee Vann Corteza this time.

The Filipino duo gave the country its third World Cup crown in eight editions of the tournament after nipping the Dutch pair of Neils Feijen and Nick Van den Berg, 10-8, in a pulsating championship match on Sunday at York Hall in Bethnal Green, East London.

With the victory, Corteza and Orcollo, who are ranked third and fourth in the world rankings, respectively, duplicated the feat of Filipino legends Efren “Bata” Reyes and Django Bustamante as World Cup champions. Reyes and Bustamante won the Cup twice in 2006 and 2009.

The Filipinos, who defeated, Croatia, Singapore, Hungary and Chinese Taipei on their way to the finals, pocketed $60,000 (about P2.6 million) for winning the title.

“There was a lot of pressure and things became very difficult but the Filipino community in London who supported us throughout really helped us through,” said Orcollo.

“I reached the final of the World Cup in Manila in 2010 but we came up short, so it is fantastic to win here in London,” said Orcollo, who, along with his partner then, Roberto Gomez, dropped a 5-10 decision to China in the finals of the tournament three years ago.

“Representing my country is such a big honor for me and I’m very thankful and proud to have won the World Cup of Pool for the Philippines,” Corteza told the tournament’s official website.
Under the winner-breaks format, the Filipinos started strong, opening up a 2-0 advantage, before the Dutch caught up at 3-3. A three-rack string boosted Orcollo and Corteza to a 6-3 lead, before Feijen and Van den Berg rallied to take an 8-7 advantage.

But Feijen missed the black-8 in the 16th rack, giving the Filipinos an open table which they finished off.

On the hill, Corteza buried a long shot on the 8-ball to the corner pocket, after a Van den Berg miss on the pink-4. Orcollo, who broke dry in the 18th rack, sealed the victory by calmly sinking the 9-ball. Cedelf P. Tupas

THE tandem of Dennis "Robocop" Orcullo and Lee Vann "The Slayer" Corteza made the country proud anew after winning the 888.com World Cup of Pool 2013 yesterday at the York Hall, in Bethnal Green in London, United Kingdom.

The Filipino duo edged the pair of Niels Feijen and Nick Van Den Berg of the Netherlands, 10-8, in the finals to enroute the coveted title plus the top prize of $60,000.

On the road to the finals, the two Pinoy tumbok king needed to beat Croatia, Singapore, Hungary and Chinese Taipei.

Thus, Orcullo and Corteza became the second Filipino pairing to win this prestigious title. Filipino legandary pool masters Efren "Bata" Reyes and Francisco "Django" Bustamante won the inaugural event in 2006 when they crushed Earl Strickland and Rodney Morris of the United States in the final in Newport, Wales. Three years later, Reyes and Bustamante lifted the trophy again in SM North EDSA in Quezon City when they beat Thorsten Hohmann and Ralf Souquet of Germany in the final match.

“The fans here were why we won. There was a lot of pressure and things became very difficult but the Filipino community in London who supported us throughout really helped us through." said Orcullo to the organizing committee Matchroom Sport.

“I reached the final of the World Cup in Manila in 2010 but we came up short so it is fantastic to win here in London. I would love it for me and Lee Vann to defend the World Cup in the Philippines next year as it would be a dream come true to win it again in our home country,” he added.

Corteza added “You have to thank those Philippines supporters who helped us through. Representing my country is such a big honour for me and I’m very thankful and proud to have won the World Cup of Pool for the Philippines.”

The Filipino took a 2-0 commanding lead in the race to ten racks, winner' break format but was tied at 6th racks with 3-all count. The Philippines moved 7-3 until the Dutch level the count at 7-all.

The Dutch took the next and looked set to move to the hill but Van den Berg made it tougher than it needed to be, going from the 7 to 8 and Feijen missed a pressure pot that probably should have gone in.

Instead of 9-7 it was 8-8 and the tension was palpable. A great break eased the nerves for the Filipinos and they ran out to reach the hill against the odds.

Orcollo was breaking for the match but nothing went down. Feijen shot the 1 ball home and with an open layout, it looked as though it was going to a decider. Van den Berg though twitched on the pink 4 to seemingly gift the rack and the match but some poor positional play from both Filipinos made every shot a heart-stopper. The big one was the long 8 ball and somehow Corteza managed to make it and when his partner downed the final 9 it sealed a superb win.

Van den Berg was willing to take the positives from the week; “We have never reached further than a quarter-final at the World Cup. There are some very difficult opponents in the tournament and we played really good pool all week. It is too bad we didn’t snap it up but if I can sign for second place every time we play I will do it”

Feijen added, “We showed a lot of heart as we were down 7-3 and missed some difficult shots. At 8-7 I missed the 8 ball and unfortunately in the last game it was the 4 ball but you win together and lose together. It was pretty close but they’re great players and play great as a team.”
Posted by Jovie Sison at 2:24 AM No comments:

World Cup of Pool in London, UK: Philippines versus Hungary

Finland vs England B

Chinese Taipei vs England A

THE Philippines and Hungary face off in a quarter-final matchup to determine who takes one of four spot heading into the semi-final round of the 888.com World Cup of Pool 2013 being held at the York Hall, in Bethnal Green in London, United Kingdom.

Dennis "Robocop" Orcollo and Lee Vann "The Slayer" Corteza carried the fight for the Filipino pool wizards by posting a 7-3 win against Singapore led by Chan Keng Kwan and Aloysius Yapp in the Round of 16 to arranged a quarter-final showdown with Hungary made up by Balazs Mikos and Gabor Solymosi, who brought downed Russia, 7-4, led by Konstantin Stepanov and Ruslan Chinakhov, 7-4.

The Filipinos took a 3-1 to 6-2 commanding lead and never looked back for a 7-3 triumph.

Completing the Final Eight are Finland vs England B, Holland vs Japan, and Chinese Taipei vs England A.